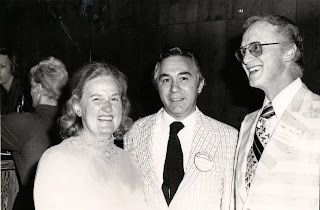 While going through some pictures, I found this picture of my parents with Carl Stohn, Jr. (far right) a man who should be a Chicago legend. Sadly, he is not. This blog post is my feeble attempt to write something about this great man who I remember fondly. Carl Stohn, Jr. was born in Canada but moved to Chicago sometime before 1950. When my father first introduced me to Mr. Stone, I was a young girl, probably around 1968. For the next 10 years I would meet with and talk to Mr. Stohn. My father ran a business that provided seminars (and an annual conference) to electronic engineers. The seminars lasted a week and were arranged by my father four times a year. When my father moved his offices from Wabash Avenue in downtown Chicago to the suburb of Oak Brook, he began hosting the seminars at Pheasant Run Inn located in St. Charles, Illinois. It was here my father met Carl Stohn, Jr. who produced and directed plays at the theater in Pheasant Run. The theater was a new concept - dinner theater. During his career in Chicago, he directed many of the great screen legends in popular plays of the day.
By 1950 he was already a well known producer and at that time also acted. During this time he produced plays for the only winter stock company outside of the New York area. When Carl Stohn joined forces with Tony DeSantis to produce and direct plays at Drury Lane Theater in Evergreen Park, the concept of dinner theater was new. Mr. Stohn was an innovator in the industry. When Pheasant Run opened their dinner theater they recruited Carl Stohn to produce and direct their plays. He had a reputation in the industry and was able to attract many big name stars to perform in his plays. Pheasant Run Dinner Theater was set up like a restaurant on multiple levels with a stage in the front. Patrons would enjoy a full course meal followed by good entertainment. He was well spoken, witty and a very sharp dresser. He was a class act. He also liked a bit of flash and always wore stunning jeweled cuff links and several diamond rings.
On August 21, 1980 Carl Stohn, Jr. was brutally assaulted, mugged and shot in the head. Several south side gang members were put on trial for his murder. It is ironic his death occurred around the same time as the decline in popularity of dinner theater. Although he seems to have been forgotten by most, I will always remember him.