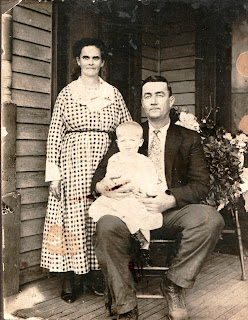 I have begun working on my biological family tree. After over 2 months of visiting my brother and sister every week and I feel I know them better, it is time to put on my genealogy hat and begin asking questions. The Huffman family is fairly well documented as far as anyone born Huffman is concerned. There is an amazing website called Huffmans To The Barrens that includes many sourced documents and photos. Of course, I am looking for my own sources and verifying as I move up the tree, but my Huffmans (yes, I have more than 1 line) have been made easy for me. To make things even easier, Family Search has many records for Barren County, Kentucky available online. So last week, I was in Vermilion County visiting my new family and the time has come to begin asking questions. My grandmother was Mary Elizabeth Smith. It is her mother that is the big mystery and the subject of today's blog post. Her name was Genie (Hooten) Smith and she was adopted into a family by the name of Davis as a baby or young child. I doubt she was legally adopted since all family references to her include the name Hooten, not Davis.
Genie was born on October 15, 1887 somewhere in Texas. According to the 1900 census, she is living in Hiseville, Barren County, Kentucky as the adopted daughter of Benjamin K. Davis (aged 62) and his wife Martha. Genie is the youngest member of the household at the age of 11. Also living in the home are the other children of Benjamin and Martha:
According to this census Genie's mother was born in Texas also. The Davis family were all born in Kentucky except for Benjamin who was born in Illinois (although his parents were Kentucky born). So, how did Genie end up with this family? How did she come to arrive in Kentucky from Texas? Hiseville, Kentucky is 982 miles from the Texas border and back in the 1890's it would have been a journey that took weeks to arrive from Texas to Hiseville. As I examined this census record, I noticed others in the household that were not listed as family. A man named Hartfield Wood, age 26 was listed as "black" and a laborer. I assume he worked on the farm. Laura Wilson age 54 and Louisa A. Davis, age 82 are listed as boarders.
As I followed the Davis family forward in time through the census records, things get a bit more interesting. Philip and Bessie Walthall end up living in Texas so there may be some sort of family tie to Texas. I will have to pursue this.
So, the next logical step was to obtain a copy of Genie's death record. So during my recent visit with family, my brother and I went to the Vermilion County Courthouse in the hopes of finding Genie's death record. We filled out the form, paid the fee and read the record. It stated her father's name as James Hooten. Great, verification of her father's name! However, it listed her mother's name as unknown and her place of birth as unknown, Texas. Not much help there. Texas is a huge state and there were many men named James Hooten there, so, I now officially have my first brick wall of my biological family tree. I believe Genie had no idea who her mother was. I believe she was adopted because her mother died shortly after her birth. I am just guessing here but it makes sense that is why her father's name was known and her mother's name was not. If this is true, her marriage record may read the same way - mother unknown. Regardless, my next step is to find the marriage record of Genie Hooten or Genie Davis to Elon E. Smith in Kentucky. I also need to find out if any records of adoption exist for Genie and the family who raised her, Benjamin and Elizabeth Davis. As I said before, I doubt they adopted her because family photographs and her death record refer to her as Genie Hooten, not Genie Davis. In the meantime, I am keeping a watchful eye on anyone named Hooten in Texas. It is interesting to note that Genie's father's name was known but her mother's name was unknown. How did Genie know her father's name? Is it possible she knew him? I can relate to Genie, although our circumstances were very different, she was adopted, just like I was. I find this the perfect first brick wall of my biological family and am very excited to see what I can find on my 2nd great grandmother and her family.