I thought I would choose this Veteran's Day to write my first post about my biological ancestors. Today's post is about Francis Marion Huffman, my 3rd great grandfather who was injured in The Battle Of Shiloh during The Civil War. Francis Marion went by his middle name, Marion. He lived near Eighty Eight in Barren County, Kentucky where he worked as a farmer. 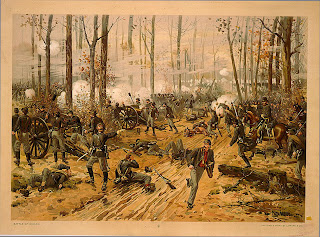 Francis Marion Huffman was born in Barren County, Kentucky on the 31st of August, 1822. By the start of The Civil War Marion was already in his late 30's, married and had 5 children to support. Marion's younger brothers Jonathan Clark Huffman and Louis Francis Huffman decided to enlist in the war in September of 1861. Their cousins, Stacey Huffman and Albert and George Baldock also enlisted. Marion joined his brothers and cousins and together they enlisted on September 24, 1861 with Capt. Chenowith's Company of Home Guards on the Union side. Marion mustered in for a 3 year period of time. He must have had strong reasons to leave his farm, wife and children who undoubtedly had to make huge sacrifices in his absence. His children were young, between the ages of 5 and 11. It is possible he believed the talk that the war would not last long. Regardless on April 6, 1862 Marion's company was at Pittsburgh Landing, Kentucky for the start of what would be known as The Battle of Shiloh. This battle would become the bloodiest battle ever seen at that time and resulted in the deaths of over 24,000 men. On the second day of the battle, Marion was shot in the foot and carried off the battlefield. The shot shattered a major bone in his foot and surgery had to be performed to remove the shattered pieces of bone to prevent infection. The injury left Marion unable to walk on that foot. According to his military records he was discharged from service on February 4, 1863. Just weeks after Marion's injury his younger brother Louis died in a military camp of a fever caused by the measles. Marion went back to his farm near Eighty Eight in Barren County and tried to continue farming, however due to his injury, we was unable to keep up with the hard labor. He died 11 years later as a result of his injury which had developed gangrene from his foot all the way up his leg to his thigh and pyaemia (a type of septicaemia).
Marion's father Thomas was a veteran of The War of 1812. His descendants have participated in every war since then.
On this Veteran's Day, I am grateful for all our veterans past and present for their sacrifices to protect us all.