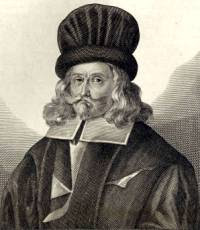 Mattia Preti was born in the Cosenza Province Comune of Taverna on 24 February 1613. Both Mattia and his brother Gregorio had a passion for art early in life and sometime before 1630 Mattia followed his brother Gregorio from his small town of Taverna for Roma to pursue his dreams. While in Roma, Mattia studied art and was greatly influenced by the art of the great master Caravaggio. Both Mattia and his brother Gregorio studied at Accademia di San Luca while in Roma. It was in Roma, Mattia's artist abilities began to blossom. Mattia sold his first painting here also. Between 1640 and 1646 Mattia made several trips to Florence after which he returned to Roma.
In 1656 Mattia left Florence for Naples where he stayed until 1659. He studied here under Luca Giordano (1634-1705). While in Naples, what was considered to be among Mattia's greatest masterpieces were painted. They were are series of frescos painted on the seven city gates depicting the plague. Painted throughout these frescos were images of the Blessed Mother and saints delivering people from the plague. Time has destroyed these frescos, however, some of Mattia's sketches have survived and can be seen today in the Capodimonte Museum in Naples. 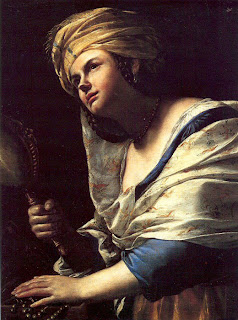 Mattia was often called "Il Cavalier Calabrese" (The Knight of Calabria) which was a reference to his place of birth. During his time in Naples, he was made a Knight of Grace in the Order of St. John. This order was headquartered in Malta so in 1659 Mattia left to visit there. He never left Malta. While in Malta in 1661 Mattia was commissioned to paint a new altarpiece for the chapel of the Aragonese Langue by Grand Master Martin de Redin. After that was completed more commissions followed. His work adorns the Cathedral of St. John. His work there would not complete until 1666. The result was stunning and these wonderful masterpieces can still be seen there today. If you cannot afford to travel to Malta to view his amazing work, you can view these stunning masterpieces at the official website of St. John's Co Cathedral.. Mattia Preti died in Malta on 3 January 1699 and is buried in the same chapel at St. John's that bears his greatest surviving art.
Most of Mattia Preti's art survives today in some of the world's greatest museums. The Lourve in Paris holds at least 15 works. The National Gallery in London hosts his painting The Marriage At Cana. Further works can be seen in art galleries and museums throughout the United States, Canada, Italy as well as Copenhagen, Romania, Madrid, France, St. Petersburg, Russia, Australia, and Vienna. His portrait of a Grand Master of the Knights of Malta, Martin de Redin done in 1660 can been seen in Chicago's Art Institute. It was Martin de Redin who commissioned Preti to paint the alter at The Cathedral of St. John in Malta. This beautiful art can still be viewed there. A list of museums that hold Preti masterpieces can be viewed at Art Encyclopedia with links to images of his art on the museum websites.
If you are interested in other artists born in Calabria, you can view a previous blog post about Giuseppe Naso of Tropea here.