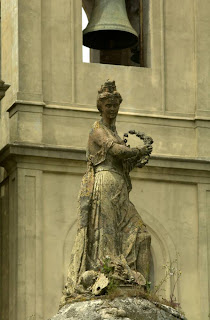 I have written in the past about discovering a cousin who was an artist in Tropea named Giuseppe Naso. Years ago when I was researching Cortale in Calabria, the town my grandmother was born in, I read about an artist who was born there named Andrea Cefaly. Pictured here is a statue he made that rests outside the church Santa Maria Cattolica Maggiore in Cortale. Andrea Cefaly (1827-1907) is known more for his paintings than his sculptures and created one painting that hangs in the Louvre in Paris. But this sculpture is really quite interesting because it is a political statement that holds a key to the identity of this family as well as an interesting period in Italian history - the unification. He sculpted it around 1870 and named it "Italia". The statue of a woman represents Italy and you will notice her back is to the church. This was a political statement representing the separation of politics from faith. It was a strong and popular sentiment around the time of the unification of Italy. The family of Andrea Cefaly supported this movement with all their hearts and the father of Andrea, Domenico was also a supporter of a unified Italy, with the separation of church and state. The grandson of Andrea, also named Andrea (referred to as Andrea Jr.) was also an artist.

Years after first reading about the famous Cefaly family, I found the 1811 marriage act of my third great grandparents Antonio Frontera and Domenica Schinnea. This document listed Domenica Schinnea's mother as Vittoria Cefali. I wondered if there was any relationship to the more famous Cefaly family but I assumed I would never know since Vittoria was born about 1754, long before civil records were kept. I also assumed there was probably no connection since the names were spelled differently.

This week while extracting the early marriages that occurred in Cortale I made 2 discoveries. The most exciting discovery was the marriage record of Vittoria Cefali to a second husband named Giuseppe Cefali. This document provided me with the names and dates of death of Vittoria's parents. Vittoria's father was Giuseppe Cefali who died in Cortale on 7 October 1773. Her mother was Giulia Pellegrino and she died 8 September 1766. I will probably never know their parent's names. The second discovery was while reading each marriage record that occurred between 1809 and 1819 there were many Cefali marriages but not a single marriage that contained the spelling Cefaly. It is currently my belief that the spelling of the surname changed. That is not unusual and I found many changes to surnames in my grandfather's town. A review of more records is needed to be certain. I will also need to examine the early allegati records and will need a lot of luck to obtain enough information on the Cefali families if the 18th century. For now, I am happy I have the names and dates of death of Vittoria Cefali's parents. Still, I cannot wait until I can read more records on Tuesday!