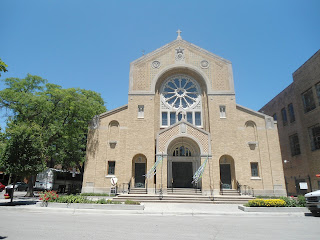 Today, people who don't know any better think Chicago's Little Italy has the largest concentrations of Italian Americans in Chicago. This was once true, however, every time I return to the "old neighborhood" I see less and less of what was once Little Italy. It is getting harder to imagine what my grandmother saw over 100 years ago. Few Italians remain there now. Pricey Italian restaurants line Taylor Street now along with many chain restaurants. Even the iconic Mario's Italian lemonade stand is no longer owned by Italians (or at least it wasn't in the late 1990's when my daughter's school friend's family owned it). My best friend and I used to hang out there back when we were in high school until we were 21 or so. A group of neighborhood boys we knew rented a storefront on Taylor Street and called it "the club". They built a bar out of plywood and had parties there. Today the club is a Subway! 35 years ago as I would walk down Taylor Street, I could still imagine my grandmother walking down the same street trying to sell her shelled peanuts to the bakeries and restaurants. You could still see the Italian faces, hear Italian being spoken on the street, smell the food cooking and the heavenly smells from the bakeries permeated the neighborhood. Today, I see another commercialized neighborhood of Chicago and the amazing smells are long gone. Many of the old houses, apartments and tenements that helped give this area it's identity have been torn down and replaced by new buildings, a skyscraper and housing and school buildings for the University of Illinois which has largely taken over "Little Italy". The area lost most of it's ethnic identity. However, much is left and there are many places you can still walk and imagine. You just have to imagine harder. 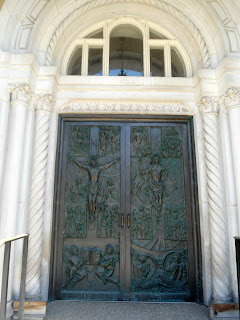 I had never heard the term "Little Italy" until the 1990's. Those of us with roots there have always called it the "old neighborhood". Although constantly changing, one constant has been the church of my family, Our Lady of Pompeii. Our Lady of Pompeii originally was started in 1910 to relieve the Guardian Angel Church which was having a difficult time keeping up with the burgeoning influx of Italian immigrants to the neighborhood. A permanent church and school was built in 1923 and finished in 1924. The church has maintained it's Italian background and has huge celebrations for many of the Italian Saints. After many of these feast day celebrations a luncheon is served in the basement of the adjacent school. The food served is to die for! The Guardian Angel Church is long gone and has been replaced by University of Illinois buildings. Our Lady of Pompeii has always been the heart and soul of the neighborhood. This church is now a national shrine and has changed much during my lifetime. The old doors in the front of the building were replaced in 1993 with beautiful brass doors with figures hand carved in Corleone, Sicily. The alter which was surrounded by gold tile for many years has been stripped away to reveal the old walls. A new statue of Padre Pio has been added as well as many other adornments. But many of the old statues hold a place of prominence throughout the church and the ceilings and columns still hold the original painted work. 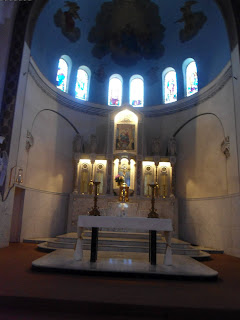 I can still feel family here surrounding me despite the changes. The church itself has maintained the most important traditions of it's Italian roots. It is a place of the Catholic faith but more importantly, it's Italian Catholic faith. There is a difference. For most of my life, I attended church here with my parents. It became important to my father to attend this church on occasion. Although my father was never a big church goer, attending church here was his way of connecting with a family that was long since passed. The last time we gathered as a family here was Santa Lucia day several years ago. Their church service and following festa meal in the basement of the school made it a memorable day. The meal after the church service made me smile. All the women got in line to get plates of food for their husbands and children before their final trip to the food line to get their own food, in true Italian fashion. Family first, always. I had seen this ritual at every family gathering as I grew up. A small gesture that made me feel so loved and protected.

Since I cannot possibly cover everything I want to in one post, I have decided to make this the first in a series about the old neighborhood. Look for my future posts about Arrigo Park, Columbus Park, Loomis Street and posts and pictures about the original buildings and architecture that remain in the neighborhood and life as it was there 100 years ago.