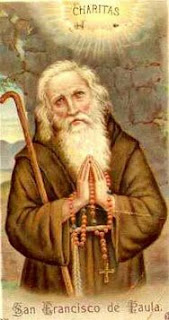 San (Saint) Francesco di Paola, is well known to the Calabrese people.  San Francesco is the patron saint of the Calabrese people.  Saint Francesco is also the patron saint of boatmen, naval officers, mariners, sailors, against plagues, epidemics, against fire, travelers and sterility. He was born Francesco Martolilla on 27 March 1416 in Paola, Cosenza, Calabria to Giacomo Martolilla and Vienna d'Alessio (who was born in Fuscaldo, Cosenza) and died April 2, 1507 in Plessis, France.  His parents were devout Catholics.  Paola is located in Cosenza Province between mountains and the Tyrrhenian Sea.  The other side of the Mountains in Paola is San Vincenzo La Costa and my grandfather's birthplace Montalto Uffugo.  My grandfather was devoted to this saint and one of the few family stories regarding his life in the area involves a miracle attributed to this saint.  He is very popular in Calabria, particularly to the Cosentina (people in Cosenza).  Most towns have a church named after him in his home province. 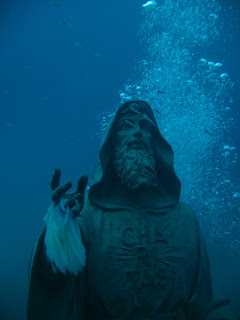 In November, 2007, for the occasion of the 500th anniversary of San Francesco's death, a bronze statue of the saint was immersed in the Tyrrhenian Sea about 23 meters deep off the shores of Paola.  The statue provides protection to fishermen and recreational boaters in the area for whom he is the Patron Saint and is often viewed by divers in the area.  Local octopus made the base of the statue it's home as well.  The eight foot tall bronze statue, crafted by Zappino recently turned up missing.  Divers have searched the area in the event the statue was dragged in error by boats or t rollers, but their searches turned up nothing.  It is unknown if the statue was stolen from the sea and searches continue.  I certainly wish them well in their searches and hope they find it soon.  With or without the statue, I am sure San Francesco continues his protection of the Calabrese people as well as the "gente di mare" (people of the sea) and all seafarers.