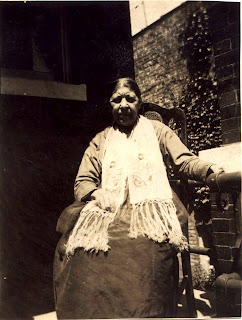 The mother of my grandmother was Natalina Scrugli. Not a common surname either here or in Italy. This week I had a major breakthrough with her family that got me 3 more generations of her family. This made me think about her...her life, her struggles and what an amazing woman she was. I am so proud of her. So today I would like to share her story. Natalina Scrugli was born about 1866 probably in Tropea, Italy. I still have not found her birth act, however, her other siblings were born there. Her father was a lawyer around the time of her birth and she grew up in a life of privilege. She was very close with her sisters Carmela and Maria and her brother Gaetano. According to the family story her family moved from Tropea to Cortale when her father was assigned a political post by the Italian government there. They lived in "Upper Cortale" in an area known as "Donnafiore" and had servants and dress makers on staff to attend to their needs. Her older sister Carmela was the first to marry and she married the Italian Ambassador to Egypt. Natalina married Giuseppe Maiuolo and had 4 children with him. Natalina's second child, a daughter named Caterina was outside the house playing on summer day when she was 4 years old. When Natalina went to check on her she found the lifeless body of her daughter. Caterina ate some poisonous berries according to the family story. Her older sister Maria told us the screams of Natalina when she found her daughter could be heard throughout the town. When my grandmother was born, she was named after this sister. It is unknown when Natalina's husband died, however, Giuseppe Maiuolo died leaving Natalina with 4 children to care for alone. Around the same time her sister Carmela became a widow after her husband contracted malaria on one of his trips to Egypt. Her younger sister Maria also became widowed around the same time. Natalina's brother who was living in Chicago arranged a marriage between his youngest sister Maria and a friend in Chicago who was also from Cortale. In April, 1904 Natalina had to say goodbye to her sisters Carmela and Maria and her niece Francesca as they left Cortale permanently for Chicago. This must have broke Natalina's heart. On the 8th of September 1905 an huge earthquake rocked Cortale. It's epicenter was in the nearby town of Nicastro (now Lamezia Terme) which buried the town and a large portion of it's population. This must have been the last straw for Natalina because in November of the same year she packed a steamer trunk and brought her 3 children to Chicago. Natalina bought a 3 flat on Loomis Street in the heart of Chicago's "Little Italy". Today that building is gone and in it's place is a statue of Christopher Columbus. Soon after, she joined the organization Societa Italiano. She opened a butcher shop in the lower level of the building and she began sponsoring Italians to come to Chicago from Italy. 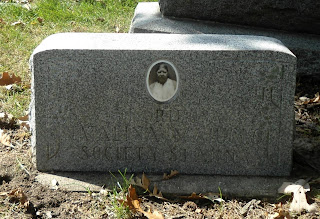 She used the upper floors of her apartment building as a boarding house for recent Italian immigrants, many of whom she sponsored to come here. She would rent space for them to live until they could find jobs and homes of their own. She helped so many families come to Chicago and begin their new lives. Unfortunately her ledgers of the boarders names was destroyed in a local flood. To honor Natalina and all the work she did for Societa Italiano, they purchased her headstone which identifies her as a member. I am proud of my great grandmother and her choices which led her to more difficult journey in life to help others. Her ancestry is:
Antonino Scrugli and Caterina Cipollini
Antonino Scrugli and Caterina Morano
Antonino Scrugli and Natalina Merotta
Girolamo Scrugli and Carmela LaTorre
Posted by Cathy at 1:13 PM