This tombstone Tuesday, I find it appropriate (since I just returned from a genealogy trip to New England) to talk about the craftsmen of many of the tombstones of my ancestors from the 1700's.
Pictured here is a tombstone from Suffield, Connecticut. This is a stone carved by the Stebbins workshops in nearby Longmeadow, Massachusetts. Since many of these headstones still exist, it is clear the craftmanship was amazing as was the artwork on the stones. Stebbins is one of my surnames which is how I came across this information during my research of that line. Ezra Stebbins was the first of the Stebbins master crafters. He

would go to the Longmeadow sandstone quaries and choose sandstone large enough to carve his ornate headstones. The business was passed down to his son Ezra, Jr., presumably Ezra taught his son the trade. No one knows for sure if others were employed as artisians, however, there are several known styles so one can presume The Stebbins family employed apprentices to help keep up with their orders. The Stebbins were most known for their winged faces and elaborate ornamentation using nature - often vines on the headstones. The majority of eyes on the faces on the headstones were larger (and more realistic) than most. As I traversed the graveyards through the mud in the rain, it certainly made photographing my ancestors graves more interesting as I tried to guess which headstones could be Stebbins' creations. I still am not sure how Ezra was related, but his beautiful masterpieces are a sight to behold.
Besides the Stebbins worshop, Elijah Sikes, and 3 generations of Johnson's in Middletown, Connecticut we 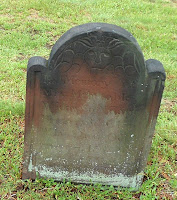 re master craftsmen of 18th century headstones in The Connecticut Valley (which includes Southwest Massachusetts). Joseph Williston of Springfield and Nataniel Phelps of Northampton were also master crafters of beautiful headstones.
Nathaniel Phelps of Northampton still has many headstones that survive in Northampton, Deerfield and many other towns. I had photographed several of his headstones without realizing it at the time. Pictured here is the headstone of a relative of mine Mehetable Clap. Nathaniel's style is clearly more simple than the elaborate Stebbins graves but beautiful, nonetheless.

Thomas, Joseph and John Johnson of Middletown were 3 generations of headstone artisans. Thomas was of the first generation whose creations from the 1720 through about 1739 also still exist throughout Connecticut. His son Joseph extended the business into Massachusetts and his career spanned from late 1720's well into the 1750's. Joseph's son John crafted headstones from the mid 1770's until the end of the 1700's. Each of the 3 generations got more detailed and more elaborate. Pictured here is John Johnson's work from Middletown which is deteriorating, however you can still see the fine craftmanship on this stone. So next time you look at a headstone you may want to do some research into who made that stone. You never know, it could be a family member!
Posted by Cathy at 8:56 PM