I am a Catholic living in Chicago. Catholic Cemeteries here are very organized and most of the Catholic cemeteries have an office you can go to with a free computerized kiosk where you can enter a full name or a surname and find the exact location of the person you are looking for. If you print out your entry you even get a map with the exact location of the grave. Simple! Not so in the old cemeteries in New England. During my 10 days there, there was only 1 day it did not rain. All the rain must have caused the bug and mosquito population to grow because several of my cemetery visits were hampered by swarms of flying insects and I have returned home covered in mosquito bites, battle scars of the fruits of my labor. Although I did not complete anywhere near what I had expected, I have come home with thousands of pictures. 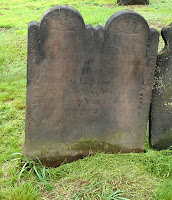 Pictured to the left is the twin headstones of 13 year old Jonathan Hunt and his sister Thankful age 7 of Northampton, Massachusetts. According to the headstone they were killed by lightening. I have found many headstones that listed a cause of death like this one although most do not. Northampton is a charming community nestled in the hills an mountains of the area and the road to Northampton is stunning in it's beauty. The only cemetery I visited there was The Bridge Street Cemetery. This cemetery is well taken care of and appears to still be accepting burials. The older graves are in surprisingly good condition, however, time is taking it's toll. I doubt 100 years from now most will be readable.

Many are difficult at best to read now. I found my ancestors there neatly along 2 rows of older graves, one row directly behind the other. By the time I found them I had searched the cemetery for 2 hours. I was pleased their headstones were readable and still existed, though I could not read some completely. Some of the headstones were beautiful works of art. The cemetery at Northampton was much larger than the others I visited.
I had been to The Mechanic Street Cemetery (Old Burying Grounds) in Westfield before. This time I knew exactly who I was going for. The cemetery is locked so I got the key and went there with my list. It is a beautiful old cemetery that has graves as far back as 1683 (Elizabeth Noble's stone). There is much open space in this cemetery and many missing headstones. The town has done a great job documenting who is there, whose is missing headstones, etc. As you walk in the gate, there is a Revolutionary War monument that bears the name of my John Dewey and all other veterans of that war born in Westfield. Well manicured lawns make it easy to move through the cemetery to find the graves. It is easy to spot the older graves because of their color. The older stones are brownish or black. White stones seemed popular in the 1800's.
In Connecticut, I began with the ancestral home of the Kent's in the town of Suffield. Suffield is the most beaut iful of all the towns I visited. The main street was lined with huge sprawling well manicured lawns dotted with beautiful flowering trees that were all in full bloom when I visited. The First Congregational Church was there with a burial ground in the back. The church has been added onto several times and I learned later all my Kent's graves are now under the church foundation. The graveyard is stretched out over rolling h 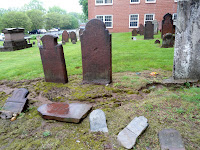 ills some of which are quite steep which made getting to the lowest spot a real challenge in the mud. Suffield has always been a wealthy town and it's graves show that. Many of it's monuments are huge and elaborate. Many of the older headstones from the 1700's are works of art. Although obviously well cared for this cemetery also has many monuments and headstones lying in ruins on the ground. This is true in most of the cemeteries I visited. These treasures of history, both family and national are deteriorating and crumbling and being lost forever. Some have been ruined beyond repair but I found so many with a little loving care that could be saved now and preserved for a hundred years or more longer. It broke my heart to see so many in such peril. It seems to me since most of these towns have historical societies this would be a perfect project for them. The broken headstones could be repaired and the headstones that have fallen over could be returned to their rightful place. Many covered in moss and lichens could be easily cleaned so the writing on the stones can be seen as well as protected from the damage the plant life would incur.
In Plym 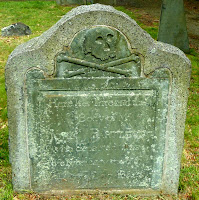 outh I found they took preservation of the Old Burying Ground there a step further. Not only is the beautiful old cemetery well taken care of, but they have preserved the old headstones in a dramatic manner that I have never seen before.
As can be seen on the image to the left, this grave of John Bartlett has been encased in concrete to preserve it. Although it changes the look of the headstone, it will preserve it for future generations to view. I am still not sure of what I think of this method but it is effective for preservation. It is clear Plymouth takes these treasures seriously as I am sure tourism is a huge portion of their income in this quaint town made famous by the pilgrims that landed on Plymouth rock. I saw no moss growing on the stones here, no broken stones as they are all well taken care of. The cemetery is high on a hilltop and offers a sweeping breathtaking view.
In Middlefield, Connecticut a small hilltop cemetery called Old North Burying Grounds was remote and difficult to find. What I saw as I opened the gate shocked me. The grass was high - past my knees and it was clear no one has taken care of this cemetery. Most of the graves were hidden by overgrown weeds and thick with moss. The cemetery looked fairly bare as far as headstones went until I realized so many were laying on the ground. Chunks of headstones were strewn about everywhere. This cemetery made me the saddest of all. Established in 1735 I knew this cemetery at one time bore the headstones of many of the children who were founders of Middletown as well as Hartford. It seemed a shame that no one seemed to care. I did find a few of my ancestors buried there, however, several were either missing or the headstones were unreadable. If I had the time and money, I would return to New England to preserve these unique treasures for future generations. 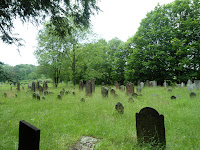