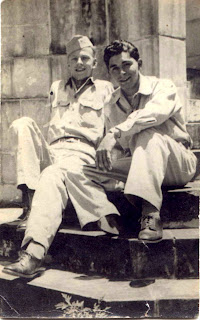 Since it is Memorial Day, I have decided to highlight some of the family members who have served our country.
The Italians
From my father, who was a part of World War II, along with his brother who served the Navy, to the first generation here, my grandfather who served in World War I, I am grateful.
Dad's service was a little unconventional. Although he was not a soldier in the traditional sense, he was part of several top secret (at the time) intelligence. Part of his service was working on radar technology and monitoring the east coast for potential invaders.
Part of his service was spent in Florida working on a new technology - microwaves. During this time the military was researching microwave technology and it's potential as a weapon.
My father also spent time in Canada during the war teaching military staff to use the new radar technology and working on improvements to this new technology.
Although my Dad did not fight on a battlefield or get shipped out of the country, he did voluntarily choose to serve his country in the best way he knew how. He offered his knowledge in new technologies that the military knew little about and make improvements on this technology which helped those serving in battles and on the sea be safer as a result.
My grandfather, Giuseppe Napolitano served during World War I at Camp Gordon, Georgia, near Atlanta. Shortly after his arrival there the Camp was quarantined due to an outbreak of the great influenza that was an epidemic worldwide that year.
The Americans - My Mom's Family
My mother's family has roots in this country from it's earliest days, as far back as 1630. From the beginning, her earliest ancestors on this land served to keep it safe. Back that far, it was not an army but a militia. Her earliest Dewey was a Cornet in the militia. Roger Clapp whom she descends from twice was a Captain and a key player in opening the first military base in this country in Boston. Her ancestors not only served during the French Indian wars in the early days of this country, but many of them gave their lives during this conflict, including the women. I have found 5 of her ancestors who died in this conflict and many who were kidnapped by the Indians (woman and children included) and brought to Quebec before the French officials. Many were rescued by Massachusetts militia that included more of my ancestors. My mother's great, great great grandfather, John Dewey served in the Revolutionary War and crossed the Delaware with General Washington's troops in one of the defining moments of this country's birth. I am fortunate enough to be able to read his journal he kept during this war. You can read it on my new website here.
I am proud of our military and so grateful to their toils and sacrifices to keep all those who cannot serve safe and protected. Past and present.
Posted by Cathy at 7:55 AM