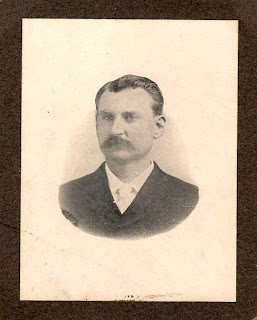 My mother's father, Dix Darius Dewey spent his entire life working on the Dewey family genealogy. He was a Certified Public Accountant whose work brought him to many different states and during these trips he would visit the local libraries and call everyone in the local phone book with his surnames. By the time of his death he had stacks of legal sized accounting books filled with names and dates from his children all the way back to the hundreds. Yes, the hundreds! When my grandfather died, my mother was given much of his work and the "Dewey photographs". I remember a large oval shaped photograph of a Dewey taken during the civil war and several tin type photographs. My hope is to one day source his life's work so it can be turned over to a genealogy library completely authenticated. It would make an amazing resource for anyone with New England ancestry. I no longer have access to his work - my mother gave it all to her brother, however, I have begun my own work into the Dewey family. It is like a who's who of the men and women who founded this country. Some of the surnames include Hawes, Noble, Clapp, Bartlett, Root, Stebbins, Spencer and Graves.
Pictured in the top left of this page is Charles Marion Dewey, the father of my grandfather. On the back of this photograph is a brief overview of the family tree typed onto paper that is taped on the back. It says Charles died in Ames, Iowa. Of all the Dewey information on the internet, there is nothing about Charles Marion Dewey. He is listed in many trees, but his wife's name and children are not found anywhere. So, I will write something about them here. 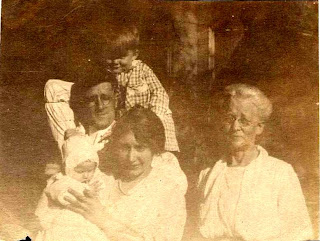 Charles Marion Dewey (pictured top left) was born on August 6, 1856 to Milton Dewey (1818-1897) and Pamelia Riggs (1818-1888) in Martinsburg, New York. He married Etta Kent on January 1, 1884. Charles and Etta had 3 children; Darius Dee (1884-1885), Don Duane (1886) and my grandfather, Dix Darius (1887). Charles and Etta must have moved around because they were married in New York, had their son Dix in Jersey City, New Jersey and Charles died in Newton, Iowa
My mother told me that her grandfather, Charles Marion Dewey, had committed suicide in Iowa. I do not know if this is true. I cannot find anything on his death yet, not even a date but I hope to find something soon.
My grandfather Dix married Myrtle Schmitt who was the daughter of Joseph Schmitt and Katherine "Kate" Bronter. The mother's of both my grandparents lived with them after their husbands died. In contrast to Dix's early American, New England roots on all sides of his family, Myrtle's father immigrated from the Alsace region of France. But that is the subject for a different post.
The Dewey ancestry of my mother
Dix Darius Dewey & Myrtle Schmitt
Charles Marion Dewey & Etta Kent
Milton Dewey & Pamelia Riggs
Chester Dewey & Phebe Wettmore
John Dewey & Achsah Clapp
Aaron Dewey & Sarah Noble
Israel Dewey & Sarah Root
Thomas Dewey & Constant Hawes
Thomas Dewey & Francis Randall
Posted by Cathy at 5:58 AM