Not To Be forgotten: Adella Kent 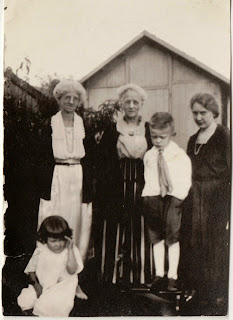 Pictured here from the left is Adella Kent, her sister Etta (Kent) Dewey, her great nephew, Dix, Myrtle (Schmitt) Dewey and great niece Dorothy Dewey. According to a note on the back of the picture, it was photographed on 27 August 1922. The note was written by Etta (Kent) Dewey. Although little is known about Adella, I feel I must write about what I know about her so she can be remembered. Adella was my great grand aunt.

Adella Kent was born the youngest daughter of Abel and Maryetta (Snedeker) Kent on 26 March 1865 in Susquehanna County, Pennsylvania. The family called her Della. By the time Della was born her eldest sibling Theresa Kent was 16. At the tender age of 3 Della's mother died and by the time she was 14 years old Della was an orphan upon the death of her father in 1879. The 1880 census showed Della was living with the family of her sister Amelia (Kent) Meeker in Bridgewater, Susquehanna County, Pennsylvania where Della attended school. Della never married or had children, she never owned property and because of this she left very few records. The paper trail we all leave behind us that may tell more about our journey through life was very sparse for Della, however, census records and Binghamton, New York City Directories have allowed us to get a brief glimpse into her life.
By 1900 Della had moved in with the family of her brother John in Binghamton, New York. Della was working as a "servant" then. In 1903 the widowed John married a new wife. This may have changed the living situation for Della because the 1903 Binghamton, New York City Directory showed Della living at 39 Broome Street and working as a furrier. She would work at a dry goods store as a furrier until her retirement many years later. This change in position would have afforded her a better life and was a fairly good position for a woman during this era. After 1903 she lived in various rooming and boarding houses. The census records and city directories showed she moved often. Of course, we know from the photograph on this page she traveled to Elgin, Illinois to visit her sister in 1922. Since the majority of Kent siblings lived in Binghamton, New York, I am sure she visited with her sisters there also. Sometime between 1930 and 1935 Della moved into the Fairview Home For Aged Women in Binghamton, New York. The 1940 census shows her living there then, and the Binghamton, New York City Directory of 1944 shows her at the same address. The 1944 city directory is the last evidence I can find of her. It is currently unknown when she died, however in 1944 she was 79 years old so it is safe to say she lived a long life.
Posted by Cathy at 8:44 PM