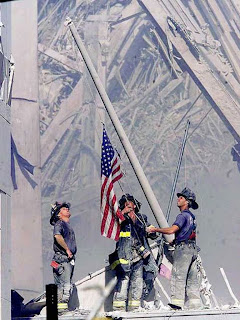 Today we remember the saddest day in this young country's existence. That fateful morning, it was a beautiful sunny day in New York, as well as Chicago where I live. I was driving to work that day and had my car radio on to Howard Stern who I did not normally listen to. When I heard him talking about a plane that hit the World Trade Center, I became agitated and thought how he went too far and that was so not funny. I thought it was another bad Howard Stern prank and it never even occurred to me that it could be real. I changed the channel and that channel also talked about a plane hitting the Tower. I was stopped at a red traffic light when it hit me - this was real. Without thinking, I looked at the man in the car next to me, shocked. He was already looking at me, his jaw had dropped open - I think mine was also. We looked at each other in shock for a moment - eleven years later, I still remember his face. I arrived at work and did not want to leave my car radio. I rushed up to my 4th floor office, unlocked my desk and pulled out a small battery operated combination radio and flashlight I kept there in case of emergency. Co-workers already had their own radios turned on. As I was rifling through my desk, I heard a co-worker yell "oh my God, it's a terrorist attack - another plane hit the second tower!" As the day went on, our Vice President put a portable television in a small conference room so we could watch the news coverage as our time permitted. The phones were quiet that day...the sound of multiple ringing phones that were heard every day were silent that day. We all know what happened that day and the days and weeks that followed. Every year all Americans have paused to remember every September 11th since. We remember those that died, those that survived, and those brave heroes that helped this nation make it through. Every year since I have paused to pray, to remember and to be grateful for all I have. That is until, September 11, 2010. That day I spent holding my mother's hand until she took her last breath. That day, I forgot, until I got home after my mother died. Now, on September 11th, I remember the attacks that day and I still pray for the lost souls that day and for the survivors and the heroes. And I also remember the most beautiful woman I have ever known, my mother, who died 2 years ago on this solemn day. 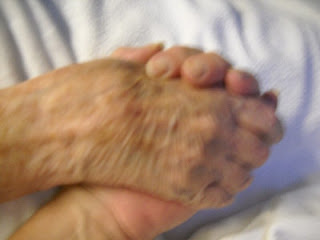