My early American ancestry on my mother's side should be what I am writing about on this Thanksgiving day. One of her family lines came into this country to Plymouth, Massachusetts and brought supplies and food to the pilgrim colony before going on to other parts of Massachusetts. This is my first Thanksgiving without my Mom and words cannot express how much I miss her now. For that reason, I prefer to write about my Dad's mother's first Thanksgiving in America. It is one that she never forgot. 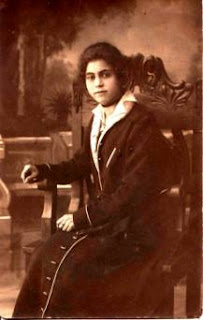 My grandmother lived in Cortale in Catanzaro Province with her mother Natalina Scrugli, her brother Francesco and her sister Maria. At some point when she was a child, her father Giuseppe Maiuolo died. Life for them in Cortale was pretty good. The family owned properties in Upper Cortale, employed dress makers to make their clothes and owned a shop among other things.
Natalina was very close with her sisters Carmela and Maria. The three sisters and their brother Gaetano were all born in Tropea to the noble Scugli family. Their father was a lawyer and held political posts which brought the family to Cortale. Since their life in Cortale was good, they did not have to come to America to seek a better life. On the contrary, I believe their life here was much more difficult.
In April, 1904 Natalina said her goodbyes to her sisters Carmela and Maria as they left Cortale for Chicago where their brother Gaetano had moved previously. Gaetano had negotiated the marriage of his youngest sister Maria to Teodoro Bertuca in Chicago. It must have been so painful to say goodbye to the sisters she loved so much.
On September 8, 1905 a horrible earthquake rocked Calabria and Cortale. The largest town near Cortale was Nicastro which was totally destroyed by the powerful quake. A little more than one month later Natalina packed up her children bound for the Port of Napoli to leave Italy forever. We will never know if the earthquake was a deciding factor.
In 1905 the journey to Napoli would have been long, difficult and treacherous. The jouney would have spanned over 245 miles. Their ship The Sicilia left the Port of Napoli on November 16, 1905 and arrived at Ellis Island in New York on November 30, 1905. It was Thanksgiving Day. After 14 days on the ship in confined quarters, the family was anxious to get off and make their way to Chicago. Especially Maria my grandmother's sister who spent the entire 14 day journey with a horrible case of sea sickness. But Ellis Island was closed for the Thanksgiving holiday so everyone on the ship had to spend one more day in the port on the ship. My great aunt could not understand why they had a national holiday for a chicken! So the family spent their first Thanksgiving in the United States on a ship looking at Ellis Island and Lady Liberty! How very appropriate.
From that point to this day, Thanksgiving dinners have included Turkey with Italian style stuffing, Italian fried meatballs, "basta in the oven" (bow ties baked in the oven with hard boiled eggs sliced thin, sausage, meatballs and plenty of mozzarella and imported Romano cheeses, an Italian style roast, several vegetable dishes which always included fresh cooked green beans and Yams cooked in Grand Marnier Liquor. As if all that was not enough, next came the fruits and nuts which always included roasted chestnuts. Then came coffee and all the Italian cookies and pastries, a ricotta pie along with other pies and goodies. Ah, it's good to be Italian during the holidays!
Happy Thanksgiving.
Posted by Cathy at 9:51 PM