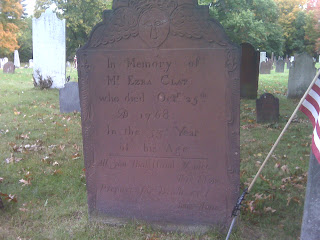 My ancestor Roger Clapp was born on 6 April 1609 in Salcombe Regis, Devonshire, England to William Clap and Johanna Channon. He was a devout puritan. In 1629 he landed at Plymouth, Massachusetts on the ship named "John and Mary" just after the harvest. His autobiography titled "Memiors" described briefly his short time in Plymouth with the remnants of the original pilgrims. From there he journeyed to Dorchester, Massachusetts via Boston in pursuit of religious freedom. He married Joanna Ford in Dorchester on 6 November, 1633 and together they had 14 children.
In 2010 we would look at the names of their children and think how strange the names were, however many of them are typical Puritan names like Thanks, Preserved and Experience.
I descend from Roger at least twice and from his father three times. I believe it may be much more since I descend from several of Roger's cousins whose Clapp connections are still unknown to me.
As I followed this family through the lines of my descent, it was like reading a book on American history. Roger Clapp was an original settler of Dorchester, Massachusetts along with his mentor Reverend John Warham. Roger Clapp did many things but his primary profession was that of Captain in the military and he spent his later years as Captain of "the Castle" (later called Fort Independence) which was the first military installation on colony soil located in what now is South Boston. Captain Roger Clapp's son, Preserved Clapp was married to Sarah Newberry. Preserved left Dorchester for Northampton, Massachusetts where he lived out the rest of his life. Preserved was, like his father before him, a Captain in the local militia, the representative of Northampton in the general court and a ruling elder of the church.

My direct line Clapp was Achsah Clapp who married John Dewey in September of 1780. The Clapp Memorial lists her husband as John Devoy (of course that is incorrect). I have searched every possible book and online source, however, I have been unable to find a place or date of death for Achsah Clapp Dewey. John Dewey died in Leyden, New York and is buried there in the Locust Grove Lord Cemetery. He is buried alone. Achsah is not buried there. I cannot find her burial anywhere in New York. John Dewey died December 31, 1821 in Leyden, New York. The last 2 records I found for him were census records for 1810 and 1820. Unfortunately, during this time the census only mentioned the head of household by name, however, both censuses listed a woman in his household age 45 or older. Although the woman could have been a housekeeper for John and the minor children, I believe it was Achsah. If she is not buried in the same cemetery as her husband, where can she be? I have a theory. I believe she returned to Westfield either to live or for a visit and died there. I believe she is buried in the Mechanic Street Cemetery near the Clapps or the Dewey's in an unmarked grave in an unknown location. When I visited the cemetery there they provided me with a list of all burials there. On the list was "Askaah" Dewey. Her location and all information about her is missing. It is my belief that is her in that unknown grave. I need the records of Westfield to confirm this but until I can search them her date and place of death will remain a mystery.
Posted by Cathy at 8:27 AM