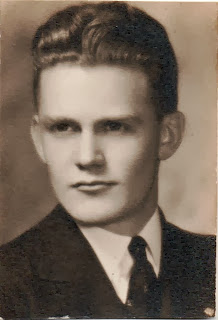 Pictured here is my mother's older brother Dix. The family called him Dixie. Dixie and my mother were very close and she never got over his death. He died many years before I was born. I heard many stories about him throughout my life. Dix was born Dix Darius Dewey (Jr.) on 27 July 1917 in Chicago (Cook County), Illinois. He was the first born child of my grandparents Dix and Myrtle (Schmitt) Dewey. My mother was born two years later in April, 1919, sister Sue was born a few years later followed by another brother Chuck (Charles). In the early 1920s the family moved to Elgin, Illinois. According to my mom, Dixie was very athletic and excelled in many different sports in school and at the Elgin Y.M.C.A. On Saturday, June 13, 1931 when Dixie was just 14 an event took place that would change his life forever. Dixie was one of five young teens representing their Y.M.C.A. chapter for the Y.M.C.A. junior track and field state championship in Chicago. The director of the Elgin Y.M.C.A. Arthur Wild drove the 5 boys in his car, however, they never made it to the championship games. On the way there a fire extinguisher truck hit the car the team was in so hard that it flipped the car over. The emergency crew that responded to the accident had to extricate everyone in the car before rushing them to the Belmont Hospital. All 5 boys were severely injured and the director, Arthur Wild was rushed into surgery where he died on the operating table. My uncle received a serious head injury. The story my mother told me about this accident perfectly matched all the newspaper articles I found about the incident. According to my mother, less than a year later, Dixie began suffering from epileptic seizures. The family always believed that his epilepsy was a result of his head injury. Despite his epilepsy, Dixie continued to participate in his favorite sports, in particular, track, javelin throw competitions and his favorite of all, swimming. On May 24, 1935, Dix was at the "Big Seven" meet measuring the distance of a javelin throw when he was severely injured in the leg by a javelin. After Dixie graduated from Elgin High School he continued to work with the students athletic endeavors there. He was a volunteer member of the Maroon Athletic Club where he helped train young athletes and mentored them. By the age of 18 Dixie had already attained the degree of master builder in his local Masonic lodge where he was very active. Dixie was an intelligent young man who did very well in school. But as he entered the workforce his epilepsy had to be kept as secret as possible because in 1930s Elgin, no one would hire anyone with handicaps. Every time he would have a seizure at work, he would be fired. As word got around Elgin that Dixie had epilepsy, it became more difficult for him to find jobs. The final job he had at the time of his death was a tax assessor. 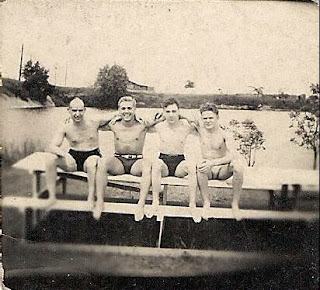 Despite all this, Dixie still was able to participate in the sports he loved so much. His passion was swimming and diving though. In the summer he went every day to the stone quarry pool in Elgin to swim and dive. On June 26, 1948 Dixie went to the quarry to swim. He was standing near the diving platform when he had a sudden epileptic seizure and dropped into the deep water. Grant Steffen saw him fall in and rushed in to recover him. Life guards assisted and the police and fire departments were called. Attempts were made from the time he fell into the water at 3:20 until 5 pm to resuscitate him, however, to no avail. Dixie died at the age of 30. My mother was on a date with my father at the time in Chicago. My father drove my mother home from their date and as the car approached the house, they knew something was horribly wrong. They could see several police cars parked in front of the house. Since my mother's 2 elderly grandmother's lived with them, she assumed something happened to one of them. When she found out what really happened, she was devastated.
I doubt there is anyone living now who remembers him. He left no widow or children. His awards, trophies and all evidence of his life is long gone. All that remains is his bible which is in my possession. But I will always remember all the memories of him that my mother shared with me. Although he did not live long, he lived a full life and made every day count.