Recently I have been trying to help someone at one of my Family History Centers who is new to Italian records. She was confused because things were not making sense. Things were not making sense because she was tracing the wrong family. Hence, this blog post.
I learned early that death records can provide the place of birth, the parent's names and more. Many United States death records also provide a cause of death. I love death records! The biggest problem with death records is, the information contained on them is provided by another person. Although I will be using Italian examples, most of the content here works with American records also. 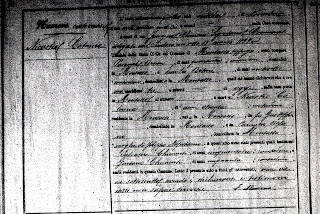 This is the death record of my paternal second great grandmother, Caterina Nicastro. According to this death record (atti di morte or act of death) Caterina died at the age of 80 in November of 1904. The record identifies her as the wife of Filippo Napolitano so we know we have the correct Caterina Nicastro. The record also states that her father was the late Giuseppe and her mother was Carmela Alfano. Great! So now we have the parents of Caterina, right? Wrong! The first question I had when I found this record was how can Caterina's mother still be living when Caterina was 80 years old? The fact is Carmela Alfano was only 9 years older than Caterina. Next we look at the people who reported her death. Pasquale Arturi, age 40 and Emilio Arturi, age 27 reported the death. Two of Caterina's daughters married men named Arturi, however, neither of these men were close family members to her son in laws. Pasquale was a 2nd cousin to one of her son in laws. So, how did they know Caterina's parent's names? The answer may be that they guessed. If they did, they guessed incorrectly. Caterina was actually 75 years old when she died, not 80. Her father was actually the late Francesco Nicasto and her mother was the late Isabella Fullone. The only correct information on this record is the date and her name. So, how do I know this? Her marriage, processetti and birth records.

This is a portion of Caterina's marriage record that clearly shows her (still living) parent's names. Both Caterina and her parents were present so we can assume that this record is correct, however, her birth record provides further confirmation.
My own grandfather's death record was incorrect. His son reported the death, however, his children never knew his true age nor where in Italy he was born. I love death records but I never trust them by themselves.
Posted by Cathy at 7:53 PM