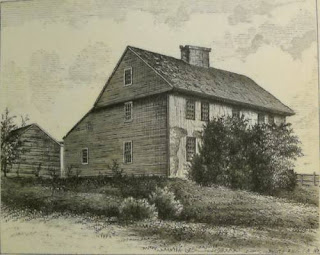 Thomas Noble was born on 10 September 1696 in Westfield, Massachusetts. He was the fourth Thomas Noble in his line and the 3rd Thomas noble born on Massachusetts Colony soil. His father, also named Thomas (the III) was married to Elizabeth Dewey. Thomas was a farmer by profession. His grandfather, also named Thomas (married to Hannah Warriner) was an early settler of Westfield. The records of Westfield show that Thomas was chosen to be a fence viewer in 1739 and 1744. In 1761 he was on a committee to build pews in the meeting house. He was a moderator of town meetings held in that same meeting house. He lived on the land of his grandfather. His house is pictured here on this page. He married Sarah Root on September 1, 1722. Sarah Root was born in 1701 in Westfield, Massachusetts to John and Sarah (Stebbins) Root. They had the following children:
Sarah Born 11 Aug 1723 Died 26 March 1796
Married Aaron Dewey
Thomas Born 6 Feb 1725
Married Susannah Cole
Stephen Born 16 Apr 1727
Married Ruth Church
Eunice Born 9 Mar 1729
Married Samuel Smith
John Born 7 Sep 1731
Married Lois Sexton
Silas Born 28 Aug 1733
Married B Dewey and May Taylor
Aaron Born 24 Dec 1735 Died 26 Nov 1760
Elizabeth Born on 2 Feb 1738
Married M. Dewey, J.C. Miller and B. Saxon
Caleb Born 1 April 1741
Married Mercy Kellogg
Seth Born 15 April 1743
Married H Barker, R. Emory and M. Riddle 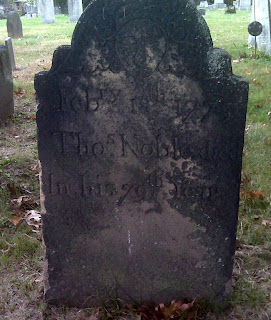 I descend from the daughter of Thomas and Sarah also named Sarah who married Aaron Dewey on 12 June 1747. There is a discrepancy regarding the date of death of Sarah (Root) Noble. The Westfield town records record her date of death as 26 November 1760, however, her tombstone states she died in Westfield on July 19, 1760. After the death of his wife, Sarah Root Noble, Thomas Noble married Sarah Field Belding in 1761. She died just a few years later on August 17, 1763 in Westfield. Thomas died in Westfield on February 18, 1775 at the age of 78 and was buried in The Old Burying Ground also called The Mechanic Street Cemetery in Westfield.
Posted by Cathy at 9:27 AM