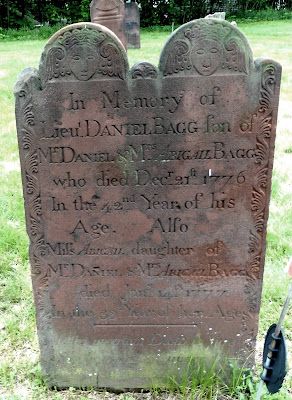 This is the exquisite headstone of Lieutenant Daniel Bagg who died on December 21,1776 at the age of 44. He is buried in Westfield, Massachusetts at the Old Burying Ground also called The Mechanic Street Cemetery. Although he was not my family, I photographed his grave because of it's beauty and uniqueness. As I was sorting through the photographs the date he died, 1776 and the fact he was a lieutenant, peaked my curiosity. A quick search revealed he was listed among the dead listed in the book "Known Military Dead During the American Revolutionary War, 1775-1783" written by Clarence Stewart Peterson. However, he is listed as "died" not killed. Exactly how he died is unknown, however, he did die while in service to the revolution. So for this blog post, I decided to look for the names of his parents. This is what I found. Daniel Bagg was born on 24 February 1696/97 in Westfield, Massachusetts. He was the son of Daniel Bagg and Hannah Phelps. He married, Abigail Dewey, daughter of Thomas Dewey and Abigail Dewey, on 12 December 1734 in Westfield. I knew if he married a Dewey during this time frame she was somehow related to my family. After all, this is the cemetery my early Dewey settlers are buried in. Further checking revealed that Thomas Dewey was the son of Jedidiah and Sarah Orton and his mother Abigail Dewey was the daughter of Thomas Dewey II and Constant Hawes. So Daniel Bagg was not related to me directly, however, his wife was. Had I not written this blog post, I never would have known that.
Posted by Cathy at 7:56 AM