I have read every book I could find on the Clapp and Dewey families during my research into the family of my mother.  They were both huge early New England families so there were many written. Of all the many people written about in these family genealogies, I have only noticed one person with no date of death - my 4th great grandmother, Achsah Clap(p) Dewey.  I always found this so sad, as if she had been forgotten and lost. As if no one cared enough to look. It always bothered me, probably more than it should have. I tried to find something on her death every way I could think of and always came up with nothing. The wills and probates of Lewis County, New York never mentioned her.
What is known about Achsah is she was born on 31 January 1758 to Aaron Clap(p) and his wife Jemima (Bartlett) Clap(p) in Southampton, Massachusetts. Their grave is pictured left - I visited and photographed it 5 months ago. John Dewey was born and raised in Westfield, Massachusetts. He left Westfield to serve in the war of the revolution and his service took him though New York among other places and he kept a diary during his service.  He fought major battles of the revolution which included crossing the Delaware with General Washington's troops to fight in the Battle of Trenton.
On 16 September 1780 Achsah Clapp married John Dewey.  They had 8 children together, all born in Westfield between 1781 and 1798.  In the spring of 1802 John brought 2 of his sons, John and Chester to Lewis County, New York to begin clearing land to build a new home for the family.  They returned for the rest of the family and left Westfield permanently later that year.
John Dewey died on 31 December 1821. 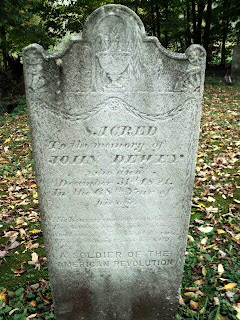 Fast forward 190 years to 2009.  While looking for Achsah's date of death I came across a website that listed residents of cemeteries in New York State. It listed my John Dewey's grave in the same cemetery as a few of his children. The cemetery list seemed complete. Achsah's name was not there. This deepened the mystery for me - where was Achsah buried?  Did she remarry? Perhaps she returned to Westfield or Southampton for a visit and died there? Why was she not buried with her husband? What happened to Achsah? I looked for each of her siblings and children to see where they were buried in an attempt to find her final resting  place.  Each time I came up with nothing for her. 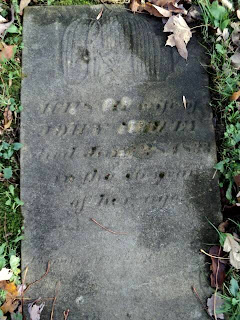 During my many visits to Find A Grave about a year later, I found a new entry for the son of John and Achsah Dewey, Chester Dewey who was my 3rd great grandfather.  Also there was his wife Phebe (Wetmore) Dewey.  I contacted the man who created the memorial which included pictures of their headstones and asked him to link Chester to his father.  He had many Dewey graves he wanted to add to Find A Grave so we began corresponding and I helped him identify the parents and children so he could link them correctly. Last week he went to Leyden Hill Cemetery and found and photographed the headstone of John Dewey and his daughter Sally.  I was thrilled.  I explained to him the wife of John was a mystery and no one knew her date of death or burial place. I mentioned I knew his daughter Sally Dewey Lord was buried there with her husband Gurdon. After further correspondance he realized that grave, located next to John, was not Sally, it was Achsah!  The grave was in very poor condition and had fallen down flat. It was covered with moss and aged.  He went back to the cemetery, cleaned up the stone a bit which revealed Achsah's date of death. I am so happy to announce Ashsah Capp Dewey died on July 28, 1833 at the age of 75.  She had outlived her husband by 12 years as well as 2 of her children.  Her grave is located next to her husband (on the ground) in Leyden Hill Cemetery located in Port Leyden, Lewis County, New York. She is no longer lost and forgotten. 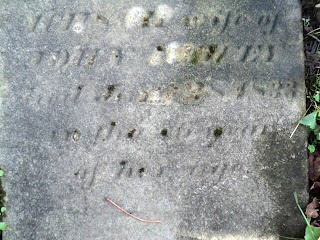