I own several websites including Cosenza Exchange. I began working on getting the records online for my grandfather's home town, Montalto Uffugo and also put some records for other Cosenza towns there several years ago. Since the Cosenza Archive is doing the same, I will probably not be adding further stato civile records on Cosenza Exchange as soon as I get all the available years of marriages for Montalto Uffugo online. I will not take the site down, I just will not be adding further stato civile records.
Plans for Cosenza Exchange
I am looking at other records the archive has available to see what I may be able to add that will not mirror what the archive is doing. The Catasti of Montalto Uffugo, San Fili and San Vincenzo La Costa were generously donated by Francesco Fullone. I had spent several months extracting the Catasto of Montalto and alphabetizing it and adding the html code. A recent virus to my computer has wiped out most of this work so I have been working on that again along with adding missing years of marriages. I hope to be adding that shortly after the holidays. I will not be extracting the catasti of San Fili or San Vincenzo anytime soon. I will be adding to the extractions of the baptisms of Santa Maria La Castagna also generously donated by Francesco Fullone. I am planning a trip there this year and am hoping my life will not obstruct these plans. If I can go, I am hoping to visit the churches and obtain permission to copy the church registers.
Catanzaro Exchange
With my impending trip to Italy planned, and once the final year of marriages from Montalto Uffugo have been a 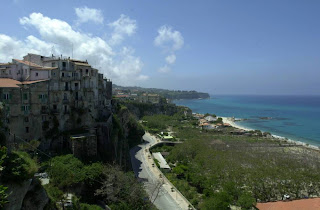 dded to the Cosenza Exchange, my focus will return to my grandmother's town of Cortale and her mother's town of Tropea. I need to complete my work on my families in those towns before I go to Italy. So, I will be adding marriage records, birth and death indexes to those towns very soon. At some point, I will be adding the comune di Filadelfia, where my great, great grandmother Caterina Cipollina was born. But that project will probably not begin until later in 2010 or 2011.
Posted by Cathy at 8:46 PM