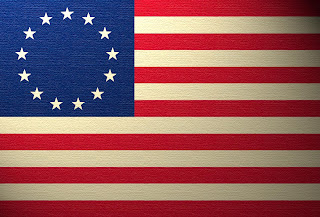 I know it is surname Saturday but this Independence Day I have to think about all the family ancestors that served on the side of the rebels in our war for independence. When you think of the birth of our nation, many believe we became an official nation on July 4, 1776. It is true that is the date we declared our independence, however, the war was far from over on that date. The American Revolution began in 1775 but did not end until 1783. Today I will tell the story of John Dewey, my 5th great grandfather. A great American Patriot whom I am very proud of.
According to his diary, John Dewey left his home in Westfield, Massachusetts to join the fight for independence on April 4, 1776. His journey began in the nearby town of Roxbury and from there he left for several place before ending up in New London, Connecticut. These men marched - there were no cars, trains or horses to ease their journey. From New London, John was lucky enough to have caught a ship to sail to New York. He was clearly impressed with New York City and the rest of the state. One day he would move his family and made his home there.
But during the war he was still unmarried. After marching hundreds of miles and surviving numerous battles, winter came early. His diary does mention cold and snow. What it does not mention is what history has. The towns in New York he was in suffered a early and severe winter. No less than 12 snowstorms 5 of which were severe blizzards occurred during December of 1776 in the exact towns where John Dewey was. Supplies and food were 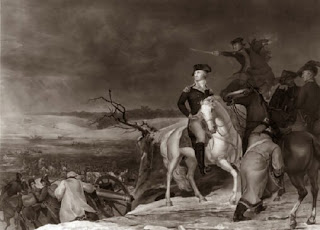 in severe shortage for the troops in New York and New Jersey. New York was lost to the British. The soldiers knew defeat after defeat. The revolution had barely begun and yet their total defeat seemed imminent. General Washington decided a bold move was necessary. In one of the Revolution's defining moments he decided they would cross the Delaware River under the cover of night and attack the British at Trenton. The soldiers were suffering tremendously. There were reports of soldiers eating shoes because of the lack of food. Many of the soldiers marched through the snow with only rags on their feet. Instead of spending Christmas Day warm in front of the hearth fire with the love of family and friends feasting on a Christmas meal, John Dewey and hundreds of other militia men and soldiers crossed the Delaware River during a brutally cold evening in a snowstorm. While his family were warm in their beds sleeping soundly, he was preparing for a huge battle in Trenton after marching for many miles in a snowstorm while his stomach grumbled from hunger and his body ached from lack of sleep and the many miles walked in deep snow. I cannot even imagine what was going through his mind. The surprise attack was the first major success of the Revolution and the battle lasted less than an hour. The morale boost it gave the Continental Army was priceless.
Thanks to John Dewey, and all the soldiers of the revolution and every war and conflict since, I will never have to know. I know this weekend we are celebrating our independence but don't forget to thank any soldiers you may know who keep us independent and free.
Posted by Cathy at 2:54 PM